The Emergence of Somatic Psychology and Bodymind Therapy

by Barnaby B. Barratt 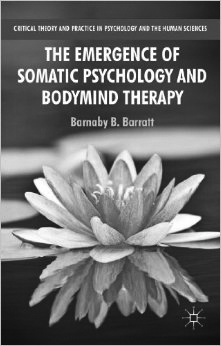 The field of somatic psychology is beginning to establish itself as a coherent discipline. Now with North American graduate programs at the California Institute of Integral Studies, Naropa University, Meridian University, and a new specialization at Pacifica Graduate Institute and John F. Kennedy University, somatic psychology is emerging as the psychological discipline of body life. Yet while it may be pre-emptive to characterize somatic psychology as a coherent discipline due to the diversity of perspectives that comprise it, Barratt’s book is a fine contribution towards fortifying the roots from which this discipline is emerging. Available in paperback (2013) at a significantly reduced price from the initial hardcover publication (2010), from $80 to $25, this recent edition is more widely available to a general audience.

The Emergence of Somatic Psychology carries forward the first systematic overview of somatic psychology. It defines the field and method, and will no doubt become a benchmark for somatically oriented theoreticians and practitioners. Its central thesis is that somatic psychology is uniquely characterized by its investigation of psychic life from the living ground of bodily experience. Unlike a multitude of contemporary approaches about the body—from holistic medicine to cultural anthropology—the uniqueness and transformative potential of the somatic perspective is that it allows the body to speak from itself and for itself. In Barratt’s words:

Somatic psychology is the psychology of the body, the discipline that focuses on our living experience of embodiment as human beings and that recognizes this experience as the foundation and origination of all our experiential potential. (p. 21)

Samuel A. Malkemus, PhD, teaches graduate courses in psychology at the California Institute of Integral Studies and John F. Kennedy University. Together with Marina T. Romero he is the founder and director of the Institute of Holistic Transformation in Berkeley, CA.  A fifth generation Californian, he leads courses and seminars in holistic sexuality and transformative education both internationally and in the San Fransisco bay area. With a private practice in embodied psycho-spiritual counseling his research interests involve exploring the role of embodied awareness in psycho-spiritual transformation, articulating a transpersonal understanding of sexuality and the sexual shadow, as well as developing somatic approaches to education and psycho-spiritual growth. The author of numerous articles he is currently preparing a book entitled The Transpersonal Body.

In this way, somatic psychology is defined as a unique psychological discipline while bodymind therapy is defined as the general praxis of that discipline. Barratt presents bodymind therapy as an umbrella term used to encompass all those embodied modes of healing that call forward the wisdom of bodily life. As such “body mind therapy is healing practice that is grounded on the wisdom of the body and guided by the knowledge and vision of somatic psychology” (p, 21).

On the one hand, Barratt’s book is a rigorous and scholarly overview of the historical origins and contemporary advances of the field. Barratt draws on philosophical (chapter 8), socio-cultural (Chapters 8 & 15), spiritual (Chapters 11 & 16), depth psychological (Chapters 6 & 7), neuroscientific (chapter 12), and Asian religious (Chapter 10) perspectives to paint a broad historical and theoretical account of the discipline while articulating nuanced critiques of disembodied and socially oppressive perspectives. In doing so, it is his intention to provide a comprehensive research bibliography for other scholars.

On the other hand, his book is a revolutionary call for holistic modes of living and healing that are aligned with the bodily intelligence of a spiritually rich universe. His radical presentation of the discipline goes so far as to make the prediction that one day “psychology will become somatic psychology and psychotherapy will be bodymind therapy” (p. 21). To defend this prophetic and perhaps grandiose claim, as well as his additional assertion that it is “neither far-fetched nor whimsical,” he presents an impressively erudite account of the conceptual history of Western culture (chapter 2). In it he explores how an ethics and epistemology of domination continue to perpetuate the “classism, elitism, racism (or ethnocentrism), gender-sexism, heterosexism, ageism, and ecocidalism” of the modern era, and shows how this modern worldview has “profoundly inscribed for all of us the condition of our alienation from the living experience of our embodiment” (p. 26). He also argues that contemporary psychology, and in particular cognitive behaviorism and psychoanalysis, has been adversely shaped by this oppressive history (chapter 1). Thus, his radical claim that psychology will one day become somatic psychology is supported by his assertion that the oppressive and disembodied ethos of the modern era is antagonistic to the holistic reality of bodily life and is in the process of internal collapse.

While The Emergence of Somatic Psychology is rich with Barratt’s creative perspectives, which include his novel definition of healing (chapter 3) and what he terms somatic sexology (chapter 14) and somatic psychodynamics (chapter 7), I was most struck by his presentation of somatic psychology as both profoundly spiritual and socially transformative. It is rare to find these two domains so interwoven and I found Barratt’s presentation of the spiritual and social implications of somatic psychology especially refreshing.

In particular, Barratt makes a radical call to somatic psychologists to not skirt the reality that somatic psychology is a “spiritual discipline,” and that “the processes of returning to the awareness of our experiential embodiment are essentially a spiritual practice” (p. 174). Yet for Barratt it is crucial that somatic psychologists also recognize that such a process is also a “subversive act.” This is because “listening to the voice of our embodied experience overcomes the alienation from our embodiment that is established in the course of our socialization and enculturation” (p. 175). In this view, somatic psychology ought to be antagonistic to psychologies of “cultural adaptation” and instead should aim to cultivate healing that brings the living voice of embodied spiritual wisdom to the critical analysis of culture and society.

This book is highly recommended to somatically oriented psychologists and bodywork practitioners. And while some readers may find it to be conceptually dense, and still others may be critical of the way that it meanders between an objective or scholarly presentation of the field and Barratt’s own revolutionary agenda, I would argue that these features actually enrich this book by providing both a detailed and radical analysis of the field. This pioneering work is recommended for anyone looking to expand their understanding of the nature, history, and transformative potential of somatic psychology.