Cristina Perea Kaplan, M.A. weaves diverse fibers into her web of life. She is a Latina who writes poetry, essays, ethnoautobiography, and fairy tales.  Her academic interests include hybrid identity, rites of passage, shamanism, and mythic stories.  She teaches middle school English to immigrant students. She lives on Miwok land, and enjoys exploring the land’s creeks as liminal spaces. She completed her graduate studies in depth psychology at Sonoma State University in 2013. With two fellow graduates, she recently founded the nonprofit, “Emerging Portals Collaborative,” to bring depth practices to a diverse clientele including youth, women and men in transition.

The line from a song in the operetta, Les Miserables, “Little you know, little you care” comes into my mind as I begin this review of Randy Handley’s (2010) interpretation of the ancient Chinese classic, The I Ching or Book of Changes. If you know nothing of this work, you may not care to read this review because it focuses upon a book that serves as an extension of the original. But if you have some interest in, or knowledge of, this mysterious guide, perhaps Handley’s quirky approach to it may appeal to you.  While I am not an avid user of The I Ching in any of its various translations, it is not for lack of curiosity. My husband owns a tattered copy of a 1970’s workbook version of it (Wing, 1979), which I have consulted on a couple of occasions after encouragement from him with interesting outcomes.

I found myself alternately puzzled and pleased that this slim volume, The Street Corner Ching by Randy Handley (2010), had come into my hands for reading, reflection, and review.  Yet having accepted the challenge, I felt that I could not fairly review this ambitious synthesis and interpretation without first dipping another toe into the mystery of the unabridged work as it has come to us in earlier English translations. Handley’s purpose in writing this version was not to compete with these previous translations, but to render the original work more comprehensible to people of varying levels of education and background. He says that, “the I Ching is very much greater than a fortune telling oracle. In my opinion it is as great a source of traditional spiritual wisdom as any text known to man” (p. xi). That is a strong endorsement. Those of us seeking transformation in the world and in ourselves, as readers of ReVision necessarily seem to do could perhaps use Handley’s  window into a work that may or may not be a natural fit for a vast number of 21st century Western readers.

So I ask myself and all of you: Does any version of the I Ching have a place in the crowded bookshelves of people who came of age in the 20th century or even those now coming of age in the 21st century?  Are its lessons, teachings, advice still pertinent to Western audiences thousands of years past its original conception as a “farming, fishing, and hunting almanac” (Wing, 1979, p. 8), and its later expansion by King Wen after he saw a vision and added commentary to make its wisdom applicable “for the worlds of commerce, politics, and social relations” (p. 8)?  Jung (1950) spoke of its value in the English translation of Wilhelm’s preface: “it is obvious that this book represents a long admonition to careful scrutiny of one’s own character, attitude, and motives.  This attitude appeals to me and has induced me to undertake this forward (p. xxiv).”

Jung’s words would have been reason enough for me to take on this review, but I did not discover them until I read Handley’s suggestion that readers of his book also acquire the Wilhelm translation with Jung’s forward.  For that advice alone, I see evidence of his wisdom and find his outlook sufficiently modest despite the immensity of the challenge he undertakes in condensing its “archaic, symbolic,” and “flowery language” (Jung, p. xxxviii ) into what he calls The Street Ching. 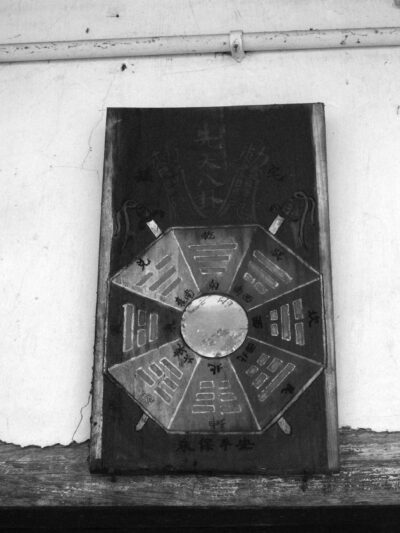 I cannot say that I love his title, nor all of his hexagram headings.  One that bothers me is “A Backstreet Girl” (p.131) which Wing (1979) calls “Subordinate” (The Marrying Maiden).  But in spite of these minor annoyances (I see the heading as flippant) I chose to approach this work with an open mind. I decided that I needed to make use of Handley’s slim volume along with a copy of Wing’s The I Ching Workbook by way of comparison. That is, I chose to consult it by throwing three coins (Handley, p. 19) before writing more than cursory impressions of the volume’s merits. I was pleased to discover that Jung too had come to the same conclusion as I, and had thrown the coins himself. I discovered this soon after I threw coins on two related questions.  Jung did so with the desire to know what the I Ching had to say about itself, its own worth, which was startlingly holistic and apt (Jung, 1950).

My questions related to the writing of this review, a maiden outing for me in this marvelous journal.  Could I review the book fairly? Would a short effort be preferable to a long one?  The Street Ching’s answer to the first question was Hexagram 7, “The Military…no victory.”  Wing’s answer seemed even more disheartening: “Collective Force (The Army)…misfortune.”  However, there were moving lines (Handley, p. 19) in my cast, so I was directed to Hexagram 46.  The Street Ching’s heading said:  “Rise Above.”   It indicated it was “Time to grow, act, climb…Advance to fortune” (p. 115).  The heading in Wing’s version was subtly different: “Advancement (Pushing Upward)” (not paginated).  Its advice was less glowing, but perhaps more encouraging: “Know what must be done and carry it out” (not paginated). When asked about the length of this review, The Street Ching answered with Hexagram 62, “Smallness” (p.147).  Could that answer have been more to the point?

In conclusion, if you know and care about the complete translations of The I Ching or Book of Changes, this abridged and colloquial version might seem to you like a sacrilege.  But if you are only toying with the idea of getting to know it, or if you are hoping to enjoy its great fruits of wisdom, but have found yourself confounded by its flowery language, Handley’s The Street Ching may be just the ticket for your entrance into this fascinating and mysterious work.  Furthermore, if you are a loyal user of The I Ching, and as such, cannot bear to leave it behind when traveling light, this slim volume might also fit your needs.  In any case, you may find that some version of the The I Ching belongs in your bookshelf at this juncture when wise teachers cannot easily be found, or when found, may not be readily consulted.