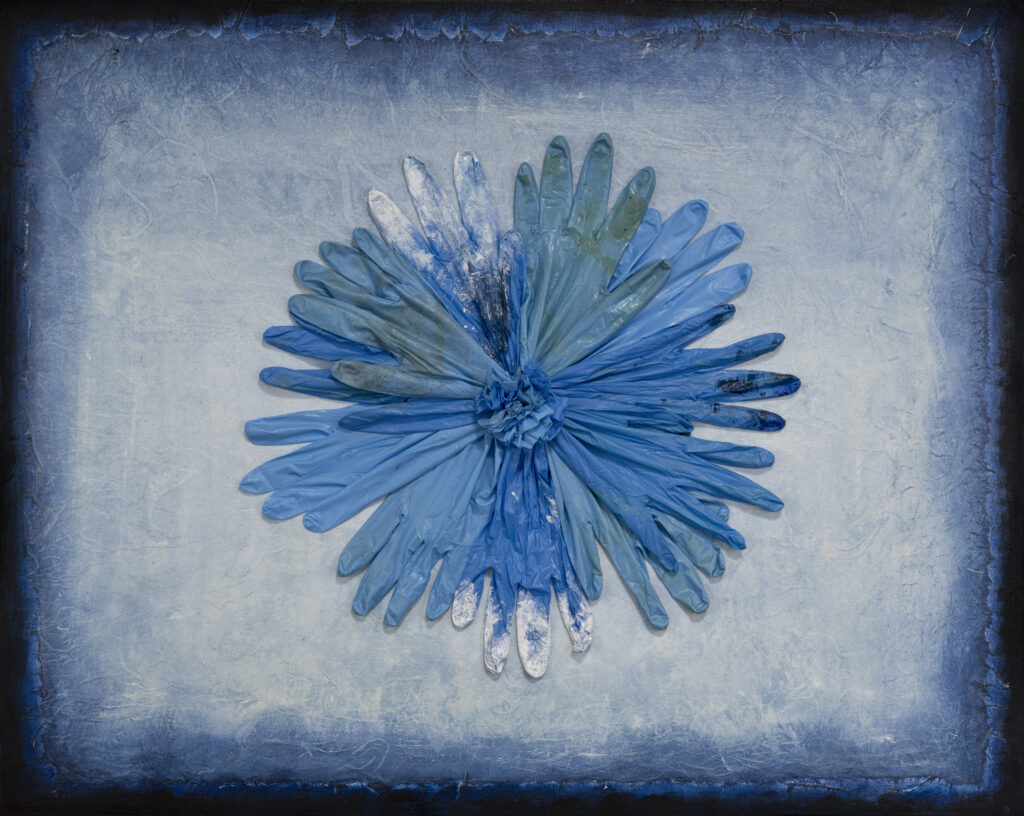 If we are comfortable with that, then we will have a contented life.

Now consider the rest of the world. What is happening around us? Climate crisis, political unrest, inequity, current and possible future pandemics, and senseless wars. Every 24 hours, an estimated 180 or more species of plants, insects, birds, and mammals become extinct. How does it feel to know we, the human species, might be extinct next? How would these realities change our lives without hope?

Without hope we face the present moment—Here We Are!

Whether sleep or awake, we are inside a grand interconnected Dream.

We only have Here in this dream creation.

Observe it: We must accept. 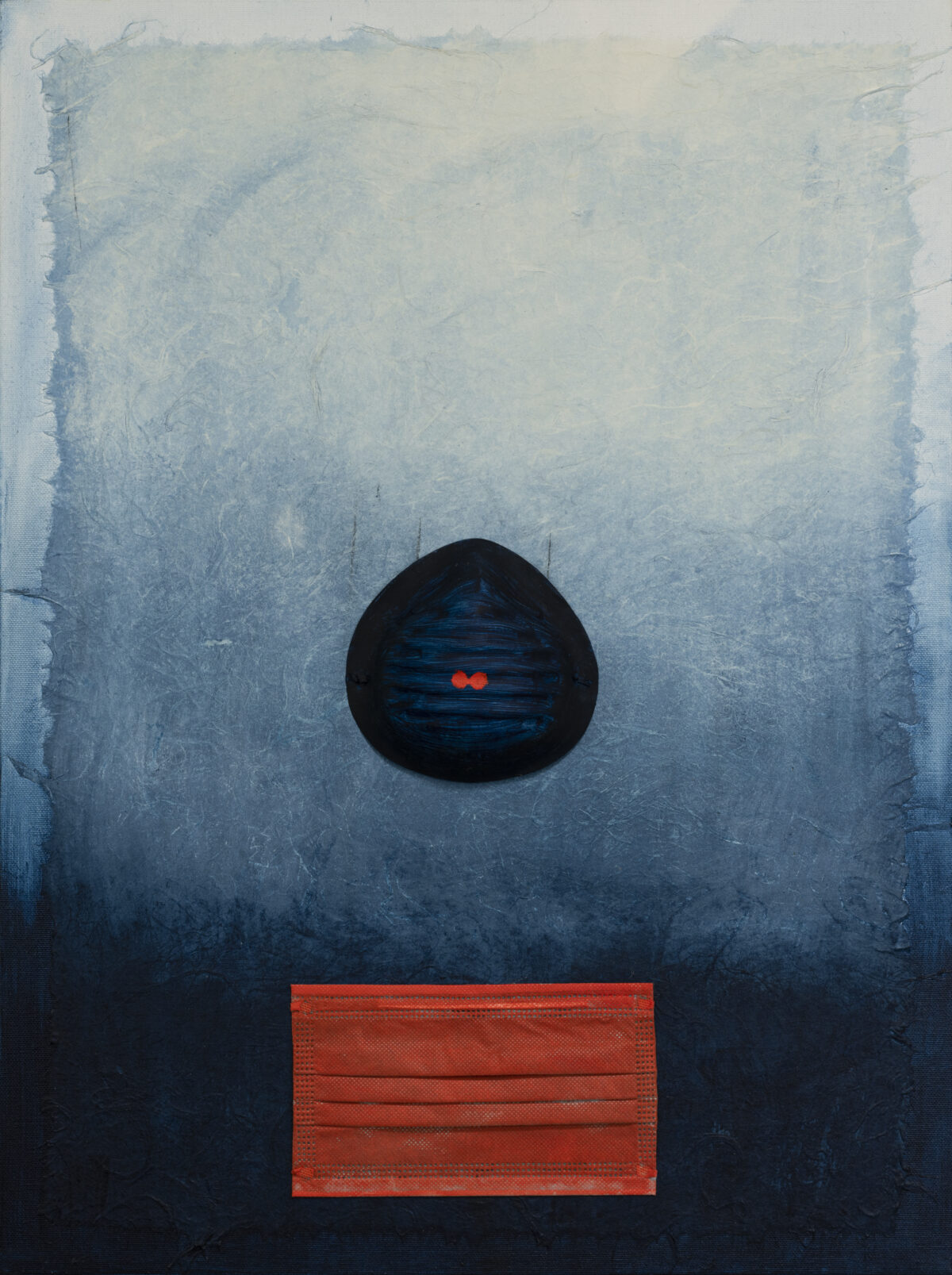 Change it: We are not where we want to be.

Is hope a dualistic concept? A desire for an expected outcome? A wish how things would be rather than what they are? Is hope a passive version of prayer?

Hope, without intention or action, is an illusion.

In the history of the human species, our current global condition must reach out for hope plus action. I will use climate crisis and our connection to nature as an example.

In our evolution, human beings have reached a level of consciousness allowing the discovery of the inner universe of the mind. For the first time, the confluence of ancient wisdom with scientific methods and global communications demonstrate the possibility for positive collective awakening. Currently, we stand at the threshold of human evolution. We have the capacity to access the depths of our creative consciousness or regress to a lower state of mind. 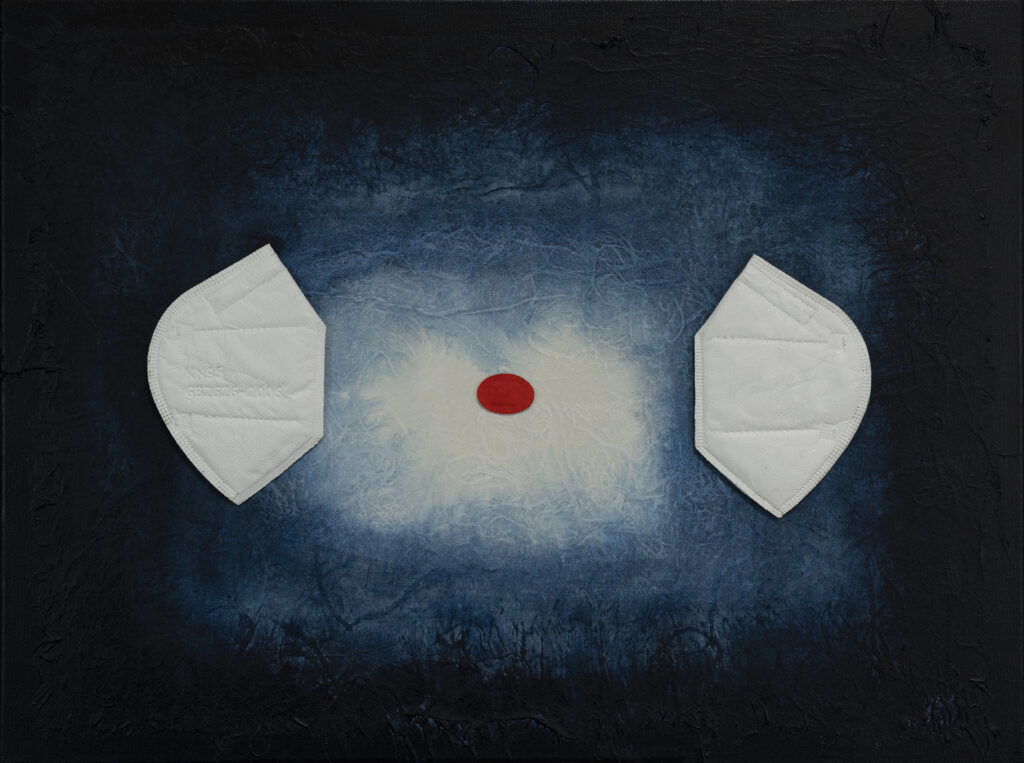 Fariba Bogzaran, Ph.D., is a scientist/artist who founded the first graduate dream studies certificate program at JFK University in Berkeley, California (1996), where she was a professor for over twenty years. Bogzaran’s interdisciplinary background is a confluence of in-depth studies and teachings in psychology, art, contemplative practices, shamanic and Taoist approaches.

Being one of the most dangerous species on earth, we are taking our planet to the edge of destruction. With minor shifts in earth conditions, we might find ourselves in a devastating situation and hope will not be the answer and any action will be too late. Once we reckon with our dualistic view of ourselves as separate from and above the natural world and instead become willing to think non-dually (that is, we are deeply connected and one with our natural environment), then there is a chance for transformation. Nature is deeply connected with itself and perhaps we are the only species currently disconnected from it. Earth will continue without us, but we can’t survive without the right conditions on earth. Do we endure as species, or in a few decades, disappear like thousands of other species?

We are not completely at fault. The complex design of our brain compared to other species perhaps needs another million years to evolve so that there is no possibility of regression. Often, we forget that we have three brains: the high cortex, mid-mammalian, and reptilian brains! A human being has the incredible potential to become an extraordinary artist, such as Bach, producing timeless creations that after centuries still elevate the spirit; an engineer creating complex rockets and sending astronauts to the moon; or a destructive being decimating itself and thousands of others! No other species on earth has the brain complexity or the capacity for such destruction. 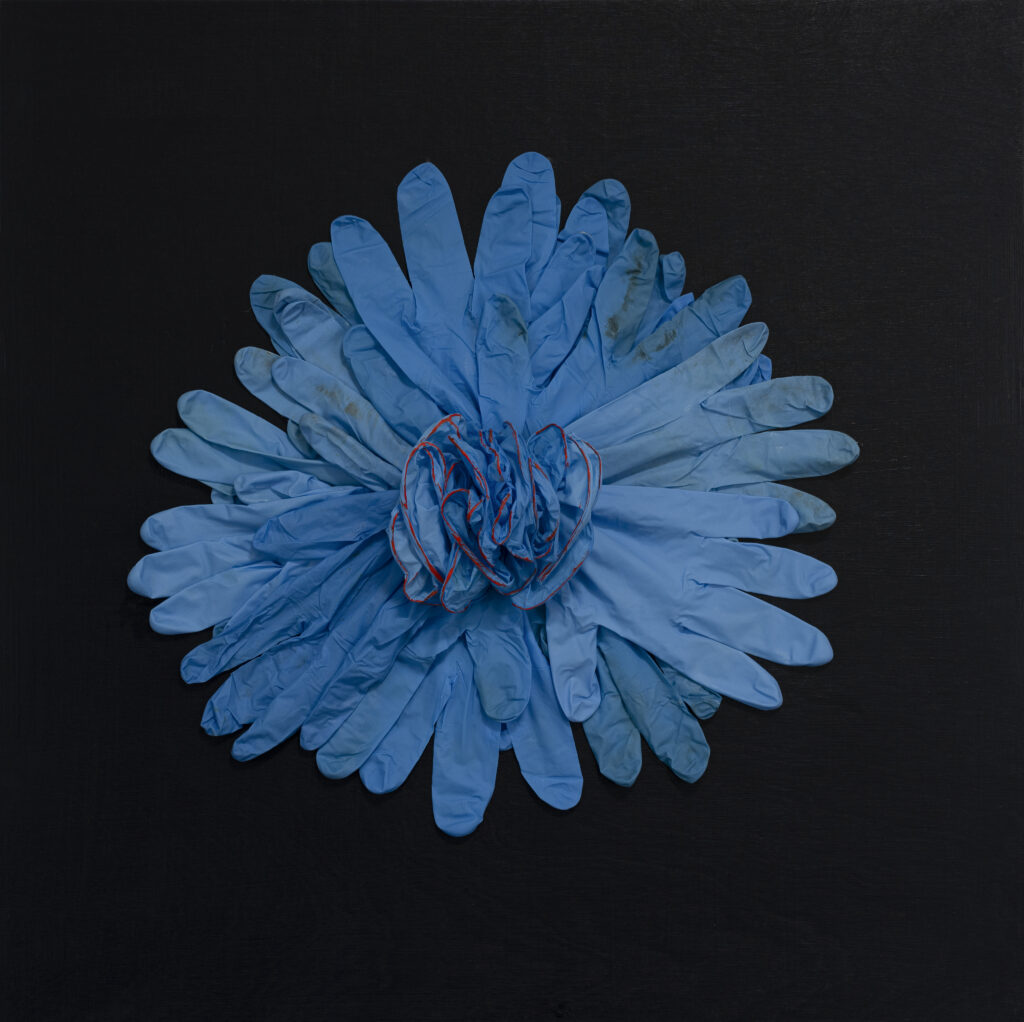 The threshold between creation and destruction that has been observed throughout human existence requires reconciliation with the complexity of our brain and how to tame its unsettling tendencies. In meditation practices, we call this wild, untamed mind the “monkey brain,” and the task becomes how to bring this mind to a state of equilibrium. This is perhaps one of the most revolutionary practices for humankind to embrace and deal with our still-developing brain. Of course, we also have an expansive human spirit and the capabilities of consciousness, such as dreaming the most extraordinary dreams, and miraculous healings, telepathy, and precognition. And we observe, when the mind and heart are aligned in positive flow, the energy body is capable of deep capacities. 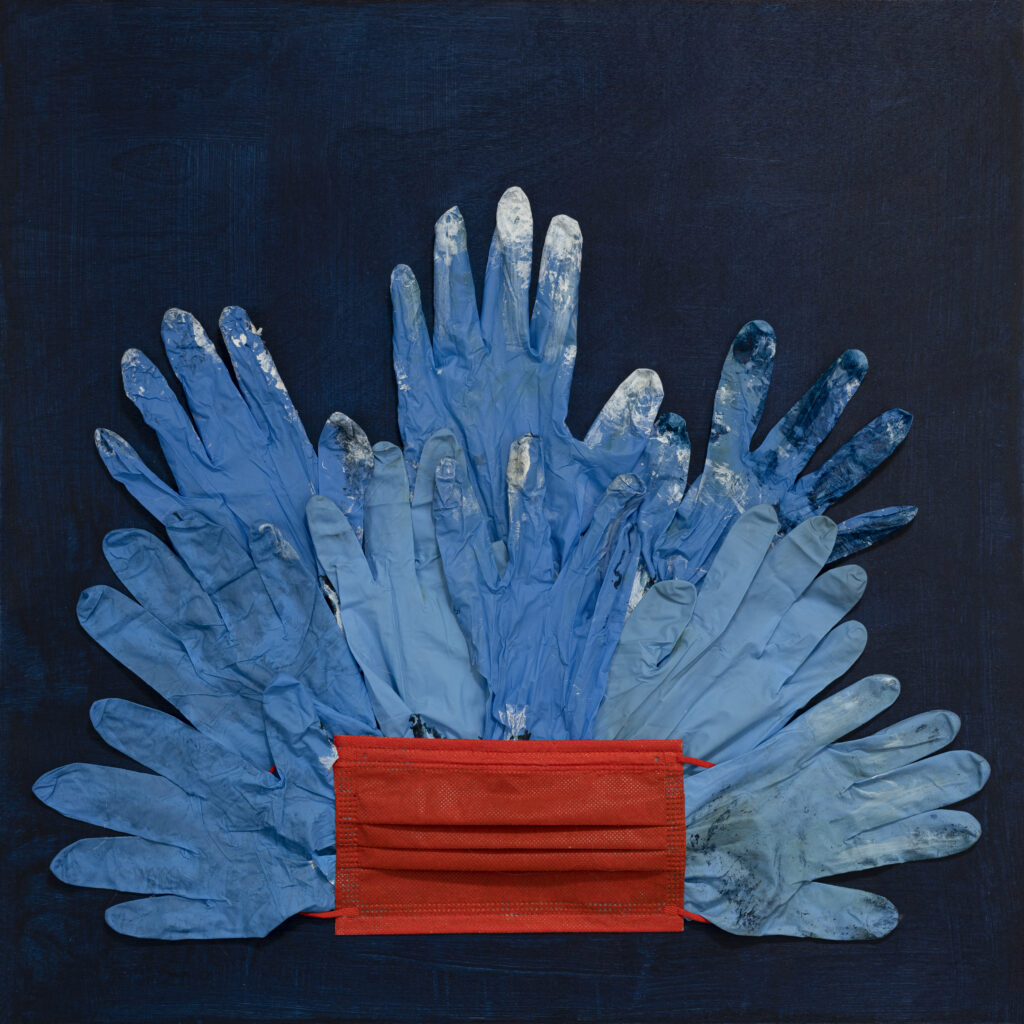 Another practice is creation, which is meditation in action. Creation moves our tendency away from destruction and brings a sense of connection to one’s life and environment. It is much harder to create a fabulous work of art than destroy it. It takes inventiveness, courage, and persistence to build a marvelous architectural space, as compared to throwing a bomb and destroying it in a matter of seconds. Destruction is a cowardly act, but also it represents the reptilian brain in command of the higher cortex. The capacities for connectedness to each other and nature, deep compassion, and the elimination of prejudice and hatred are what remediate the relationship between creation and destruction. In my conversation with the Apollo 14 astronaut Edgar Mitchell, he said as he was returning from their mission on the moon that was devoid of life, he was moved to tears with spiritual awe watching the beauty of our blue planet and the miracle of life on earth. 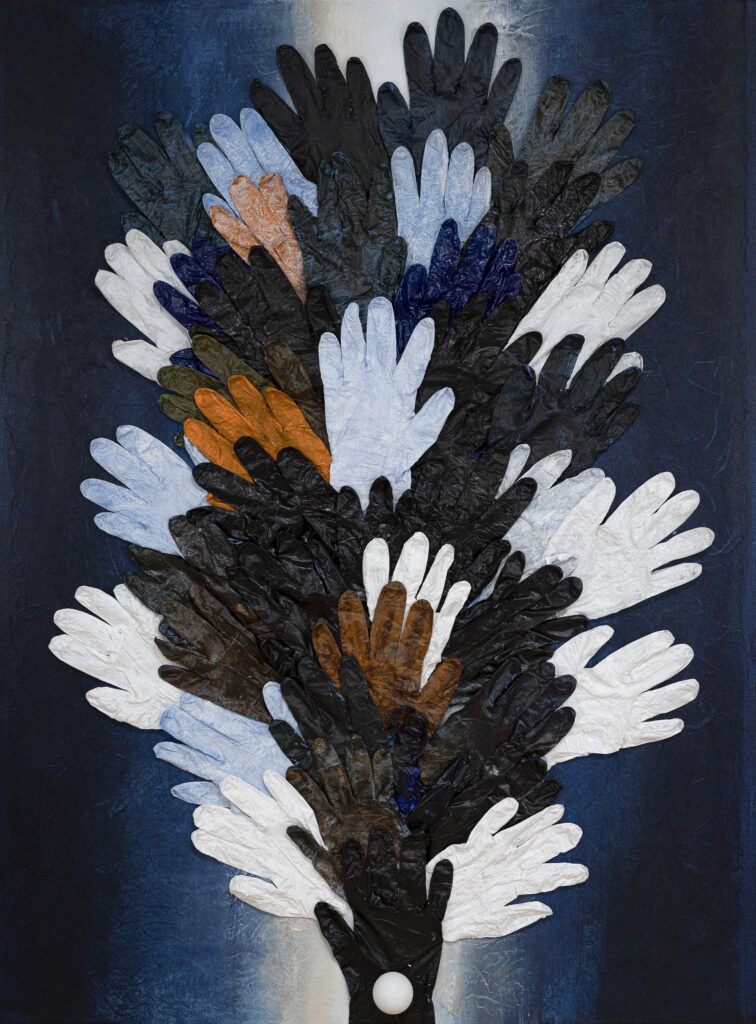 During the pandemic, like many others, I withdrew. In contemplation, I faced my choices. I needed to survive in an unpredictable time. I recalled the movie “Titanic” when the musicians started running around like others, but suddenly realized they would die anyway. They returned to their seats and continued playing their music. I decided to continue creating in my studio and create a rose garden with the intention of personal and collective healing. At the same time, my masks and gloves began to accumulate in my studio. Living in the heart of nature, the animals very quickly realized something ominous had happened. I had no human visitors. One by one, the wildlife surrounded my home, including a mountain lion. Resident bobcats, foxes, and raccoons became overtly friendly. The raven visited regularly in the afternoon for a call and response. I was living in a “zoo,” but I was the one isolated in a cage. 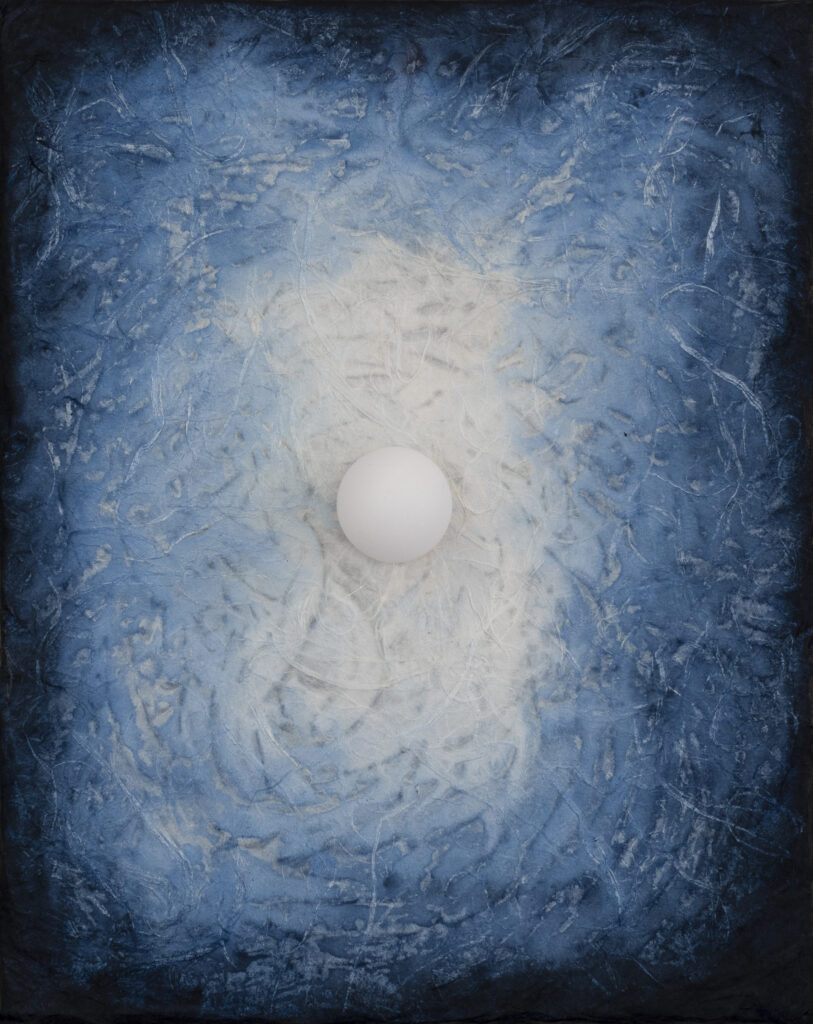 The first piece I created came out of an image from Hypnagogia (the state just before falling asleep), containing a group of gloves knotted together forming a mandala. Blue Rose, I called it, as the daily reports of death mounted.

From the Blue Rose came the first piece, Witness, created from my first two masks and that piece became the inspiration for the rest. Nightly, the hypnagogic state became a way to connect with the world and experience the images of the next works. Next came the four masks in the form of the Celtic cross. In the process of creation, I felt and saw the Alchemical image of Squaring the Circle, hence the title of the work. The artwork became a portal for collective healing. As we heard thousands were dying daily from Covid, the next image of Blue Rose I appeared. By entering the pain of those dying, along came the next piece called The Last Breath. I imaged myself being with thousands of those people who were alone and taking their last breath. As mass graves were created and the smoke of cremations filled cities, the deity of compassion with a thousand arms was invoked by Call to Avalokiteshvara. 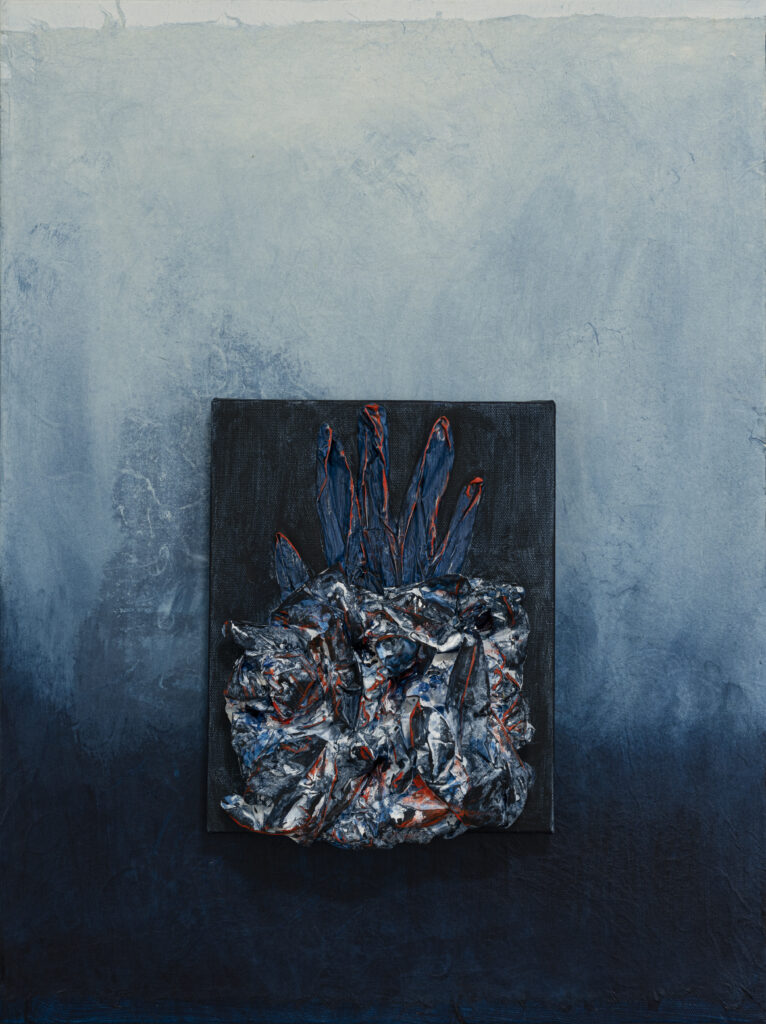 These works were not made for art’s sake; rather they became an occasion where I projected my intention for healing while being present to the departed. My studio wall became a memorial for the current situation, and for grieving with others, while the art itself became a portal to connect—an agent of change inside of my vision.

Do I have hope? I am present to what is with the clear intention to travel in the invisible worlds to make a visible impact. The artwork became the vehicle for transporting my intention to those suffering. The emergence of each work required incubation and dreaming time. While holding a glove or a mask, I think of all those who are departing senselessly, and those who are helping to heal. Out of this practice arose paintings I call Portals of Light.

What gives me the oxygen to breathe during such suffering? The love for our blue planet, the ocean, wildlife and the mystery of the roses! 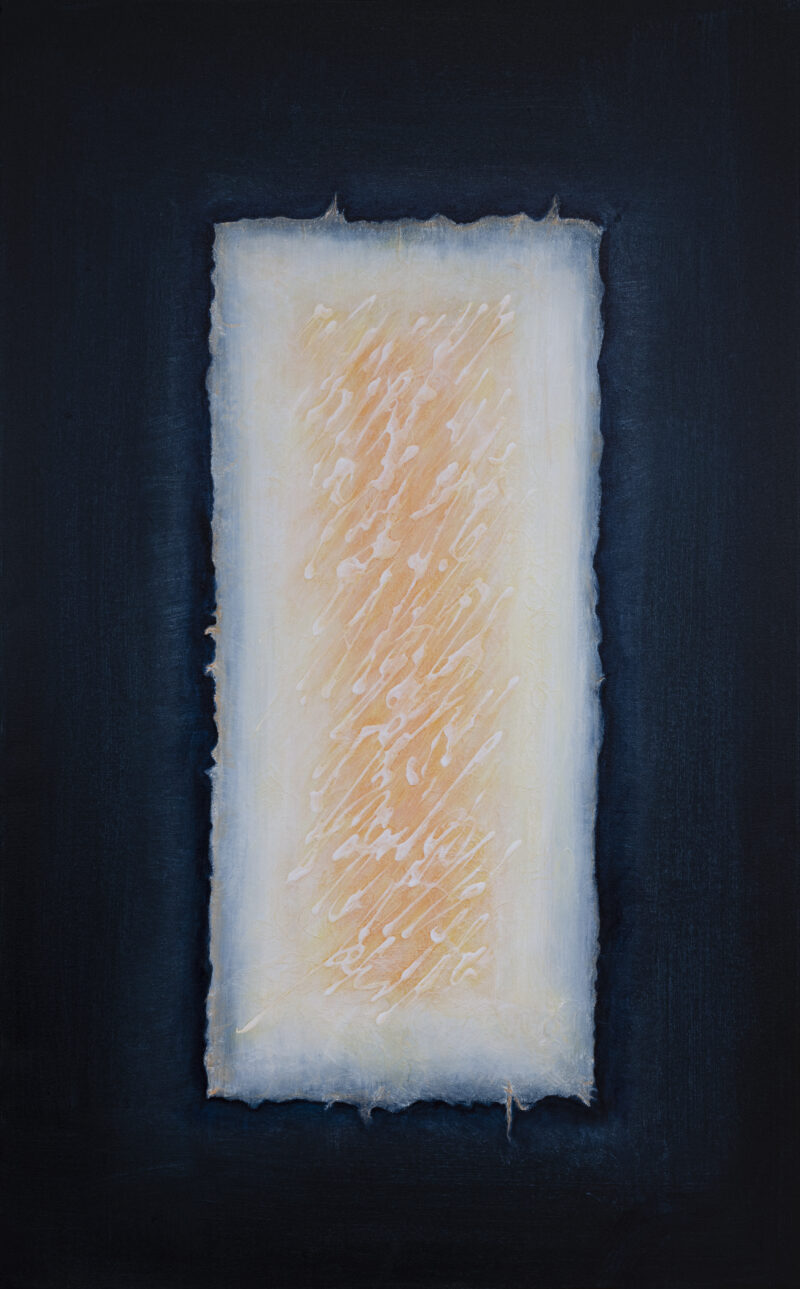 All photography by Sina Dehghani